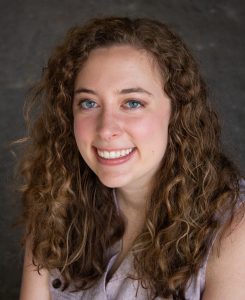 Meet Allison Hesselberg, a double major in Chinese and Theatre Studies with a certificate in East Asian Studies at UW Madison! Allison, a senior who is graduating this May, has cultivated her interests in these two areas throughout her time at UW Madison. She has weaved Chinese and drama together by translating Pan Jinlian (潘金莲), a play written in 1928 by Ouyang Yu Qian (欧阳予倩), for her senior honors thesis. Ouyang’s play reconceives the character of Pan Jinlian from the classic Chinese play, Water Margin (水浒传), in which she was famously depicted as a villainous femme fatale in the tale of the Song Dynasty rebel Song Jiang and his compatriots in their quest to overthrow the government. Ouyang revises the story of Pan through a feminist lens, portraying her as the protagonist in her own narrative who resists the constraints of traditional gendered expectations around sexual morality.

Allison was drawn to Ouyang’s version of this character’s story for her first translation venture because of Pan’s fierce spirit and its relative straightforwardness in terms of translation as a modern piece compared to older plays. She was also intrigued by the connections she saw between Pan and other female characters who were navigating the dictates of patriarchal norms in different literary contexts, such as in Medea (431 BC) by the Greek playwright Euripides, A Doll’s House (1879) by Norwegian playwright Henry Ibsen, and Machinal (1928) by American playwright Sophie Treadwell.

Allison—who was born in Seattle, Washington, and spent part of her childhood there before moving to Memphis, Tennessee—developed an interest in both Chinese and theatre at different points of her formative years. In middle school, she chose to pursue the study of the Chinese language over the more popular choices of Spanish or Latin out of curiosity and a desire to learn a language and culture that was relatively unfamiliar to her at that point. She fell in love with the language and continued to study it through high school, eventually deciding to major in Chinese after her first year in college. Her introduction to theatre, on the other hand, began much earlier as she grew up the daughter of an opera singer in a household infused with the performing arts. The act of performing is special to Allison not only because it allows her to connect meaningfully with her audience through a character, but also because of the teamwork it entails to create a successful production. She has been actively involved in university theatre productions outside of her major coursework, with her last performance being A Piece of My Heart, which portrays the service of American women in the Vietnam war.

With graduation on the horizon, Allison is looking to pursue acting and immerse herself in the performing world. She is also exploring how she might continue her engagement with Chinese either through independent translation work or through a company that uses Chinese. Her advice for students who are interested in East Asian Studies? Scratch that itch if there has been any sense of curiosity at the back of your mind. She suggests starting out by trying the cuisine or listening to the music of the specific East Asian culture you are interested in. At the moment, she is obsessed with Queen Bee, a Japanese rock band. She also highly recommends such university resources as the Guide and DARS to explore course options.

The Center for East Asian Studies is delighted to feature students who are engaging in exciting academic and extracurricular activities related to East Asian studies. If you know of a student who you would like to recommend for a profile, please reach out to Laurie Dennis at ldennis@wisc.edu.