You ask how many friends I have? Water and stone, bamboo and pine
The moon rising over the eastern hill is a joyful comrade.
Besides these five companions, what other pleasure should I ask?

The competition is open to Wisconsinites of all ages, offers monetary prizes of up to $400 to winning entries, and includes inducements for schools and libraries to promote participation in the competition. Details on how to enter as well as on how to write sijo are available at sejongculturalsociety.org/wisijo.

The UW–Madison Center for East Asian Studies (CEAS) launched Wisconsin’s first sijo poem writing contest last year. The response was overwhelming, with 238 Wisconsinites from Arbor Vita to Waukesha participating, exceeding expectations of CEAS and its partner for the competition, the Sejong Cultural Society of Chicago.

Entries were judged by two distinguished professors of Korean literature. Three grand prize winners and nine runners-up were chosen in the three age categories. Read last year’s winning sijo poems, along with bios of the winners.

“Given that nearly all the entrants had to take time to learn something completely new and unfamiliar, we were blown away by the response,” said CEAS associate director David Fields.

“Sijo distills language to its essence, and, thus, compels one to make each word shine,” said last year’s Grand Prize Winner Thomas Singleton. “I, as a poet, am thankful for the sijo competition for this opportunity to learn a form expressive of Korean culture, which has broadened my poetic horizons immeasurably.”

“Writing a sijo is challenging, but very gratifying,” said Fields, who wrote five sijo on Wisconsin themes last year to draw attention to the competition, including two on the Green Bay Packers. One of Fields’ sijo heralded the Packer’s earning the number one seed in their conference in last year’s NFL playoffs:

Freezing Fog, short sunless days, frost frames the windows and doors.
The cranes have departed, seeking shelter like us all.
But our hearts are warm. The Packers will play at Lambeau. 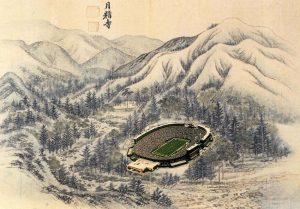 Given the Packer’s home loss in the conference championship, this sijo evokes painful memories for Fields, who still plans to write more Wisconsin-themed sijo this year and challenges all Wisconsinites to give it a try. Fields’ sijo, along with what he refers to as “questionable artwork” will be posted on CEAS’ Facebook page: facebook.com/UWCEAS.

The Wisconsin Sijo Competition is funded in part by a Title VI grant from the U.S. Department of Education.