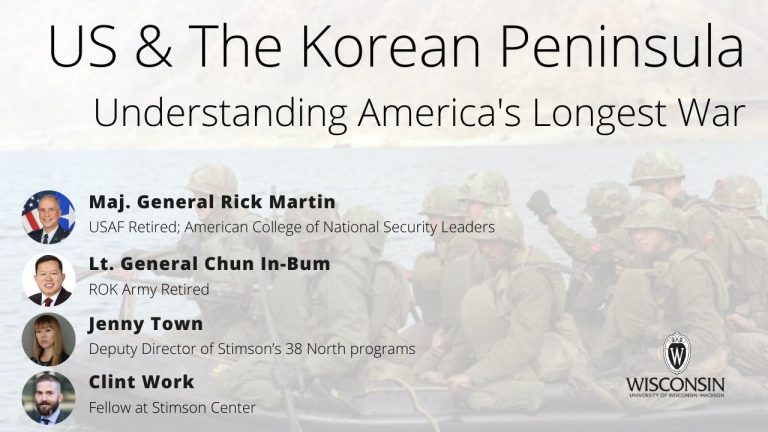 The US & The Korean Peninsula: Understanding America’s Longest War

The year 2020 marked the 70th anniversary of the outbreak of the Korean War. Although hostilities ceased with the Korean War Armistice Agreement in July of 1953, no formal peace treaty was ever signed. In other words, the war lives on in a militarized and divided Korean Peninsula, a seven-decades old alliance with US military presence in South Korea, North Korea’s increasing nuclear and ballistic missile capabilities, and deeply ingrained mindsets.

The Stimson Center and Stimson’s 38 North program, working with the University of Wisconsin-Madison’s Center for East Asian Studies (CEAS), brought together analysts as well as former US and South Korean military officers to assess the current situation on and around the Korean Peninsula. Moderated by Dr. Clint Work, a Stimson Fellow, the webinar offered a virtual conversation with featured speakers, Maj. Gen. (Ret.) Rick Martin of the American College of National Security Leaders (ACNSL); Lt. Gen. (Ret.) Chun In-Bum, former general in the ROK Army; and Jenny Town, Stimson Fellow and Deputy Director of Stimson’s 38 North program.

Among a range of other issues, the webinar examined lessons learned from President Trump’s approach to North Korea and what aspects of that approach the incoming Biden administration can or should maintain; how both diplomacy and defense are mutually reinforcing when it comes to North Korea; and the prospects and challenges for diplomacy in 2021 and beyond amidst COVID-19, a rapidly shifting strategic environment, and changing US leadership.