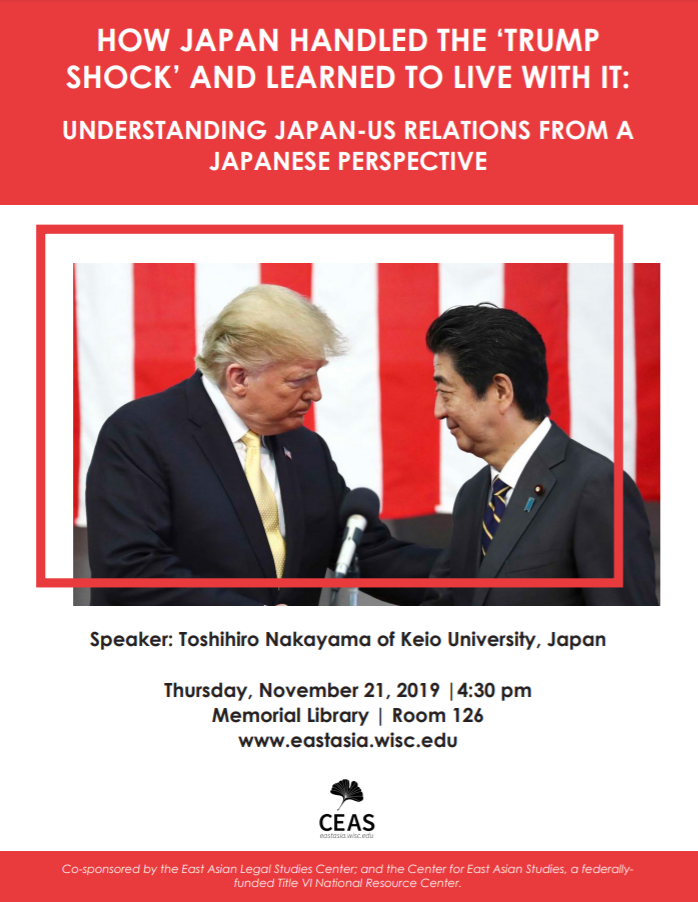 How Japan Handled the ‘Trump Shock’ and Learned to Live with it: Understanding Japan-US Relations from a Japanese Perspective

Toshihiro Nakayama is a Professor of American Politics and Foreign Policy at the Faculty of Policy Management at Keio University. He is also an Adjunct Fellow at the Japan Institute of International Affairs. He was a Special Correspondent for the Washington Post at the Far Eastern Bureau (1993-94), Special Assistant at the Permanent Mission of Japan to the United Nations in New York (1996-98), Senior Research Fellow at The Japan Institute of International Affairs (2004-06), Associate Professor at Tsuda College (2006-10), and Professor at Aoyama Gakuin University (2010-14). He was also a CNAPS Visiting Fellow at the Brookings Institution (2005-06), Sir Howard Kippenberger Chair Visiting Professor at the Center for Strategic Studies, Victoria University in Wellington (2017), and a Japan Scholar at the Woodrow Wilson Center (2018-2019). He received his M.A.(1993) and Ph.D.(2001) from Aoyama Gakuin University. He has written two books and numerous articles on American politics, foreign policy and international relations. He appears regularly on Japanese media. Recipient of Nakasone Yasuhiro Award (Incentive Award) in 2014.

A podcast version of this event is available through the East Asia Now Podcast.