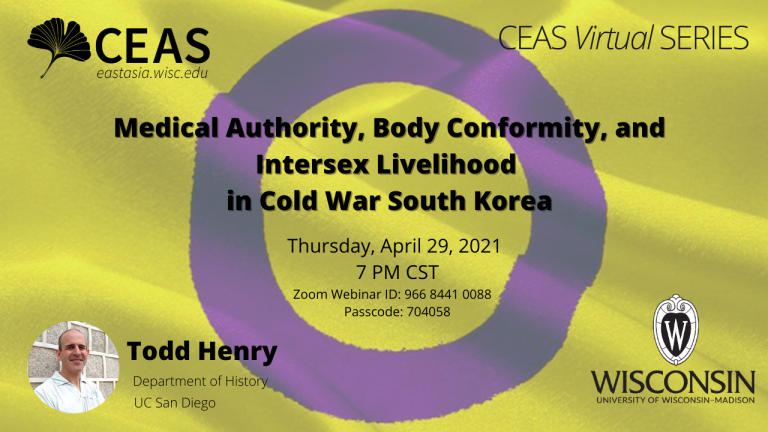 This talk will offer a critically-layered analysis of “sex change” (in reality, intersex-related procedures) in Cold War South Korea. Professor Henry traces how corporeal ideologies of sex dimorphism and heteropatriarchy came to function as the sanctioned but contested building blocks of scientific modernity and state supremacy in the two decades after the Korean War. Based on a binary model of sex requiring consistent reaffirmation in schools, the military, and other institutional sites, these naturalized ideologies were primarily invoked to promote the reproductive and defensive agendas of capitalist development. Focusing on the mediating role of news reporters in justifying medical inspections and police surveillance of non-conforming subjects, he will show how the sexed and gendered dictates of ableism gave rise to cultural anxiety, popular scrutiny, and surgical procedures aimed at ensuring dimorphic rules of body coherence. Professor Henry will further emphasize the violent effects of this selectively normalizing regime, exposing how medical doctors and other social actors insisted on surface-level body conformity, while neglecting the deeper and everyday layers of embodiment that animate intersexuality and other corporeal diversities.

The speaker, Todd A. Henry (Ph.D., UCLA, 2006; Associate Professor, UCSD, 2009-Present), is a specialist of modern Korea with a focus on the period of Japanese rule and its postcolonial afterlives.