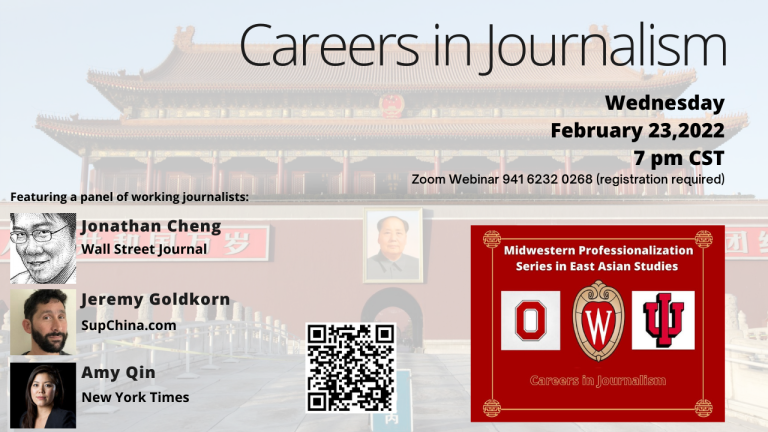 In the first event of the “Midwestern Professionalization Seminar for East Asian Studies” series, a panel of leading journalists in the field talked about their career paths, how they became interested in East Asian cultures and languages, and the challenges and joys of their current jobs. Panelists included Amy Qin of the New York Times, Jonathan Cheng of the Wall Street Journal, and Jeremy Goldkorn of SupChina.com.

CEAS collaborated with colleagues at The Ohio State University and Indiana University Bloomington for the “Midwestern Professionalization Seminar for East Asian Studies,” a two-part series of events in Spring 2022. The series is aimed at sharing skills for advancing one’s career and introducing various career paths using East Asian language and area studies expertise.

Amy Qin is an international correspondent for The New York Times covering the intersection of culture, politics and society in China. She has covered China’s global soft power campaign, its censorship apparatus, and how Chinese citizens navigate a landscape of deepening political control.

Jonathan Cheng is the China bureau chief for The Wall Street Journal, overseeing the Journal’s coverage of the world’s second-largest economy across a range of areas including politics, economics, business, technology and society.

Jeremy Goldkorn worked in China for 20 years as an editor and entrepreneur. He is editor-in-chief of SupChina, and co-founder of the Sinica Podcast.