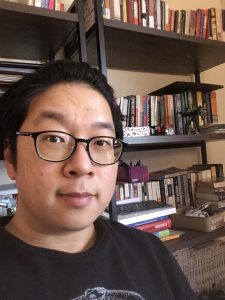 Darwin Tsen is an assistant professor of Chinese and Japanese at Carthage College. He received his Ph.D. in Comparative Literature and Asian Studies from the Pennsylvania State University in December 2016. Darwin’s fields of study include modern and contemporary Chinese and Japanese literature and culture, critical theory and literary theory, film, Asian and Eastern European postsocialism, as well as Asian American literature. His current book project, Made to be Together: Collectivity after Socialism in Fictions of the Transpacific examines how collectivity is imagined in the novels, films, television, documentaries, and comics of China, Taiwan, Malaysia, Japan, and the U.S., five disparate geographical origins tied together by the recession of Chinese socialism and the rise of neoliberal globalization. Darwin Tsen has been the Coordinator of the Chinese program at Carthage College since 2018. As a vocal advocate for critical approaches to Diversity, Equity, and Inclusion, he has been on task forces, subcommittees, and organized workshops that seek to push the boundaries of what is institutionally possible in this area.